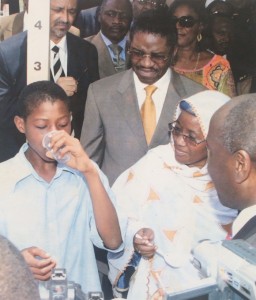 On Wednesday, 5th May 2010 the National Deworming Campaign was launched in Yaounde by his excellency, the Minister of Public health, Andre Mama Fouda and her excellency,the Minister of Basic Education, Youssouf Hadidja Alim, at Government Primary School Nkolbisson. The launched was attended by stakeholders and partners such as: the Secretary of State of Public Health; WHO Representative to Cameroon; and the Permanent Secretary for the National Programme for the Control of Schistosomiasis and STH, Helen Keller International, Sight Savers, Perspectives and International Eye Foundation.

The drugs used in deworming all the children were generously donated by our pharmaceutical partners, Johnson &Johnson and Merck.  Mebendazole (MBD) 500mg was donated by Johnson & Johnson while praziquantel (PZQ) 600mg was given by WHO/Merck. All activities carried out during the campaign were facilitated by the partnership between the Ministry of Public Health, Ministry of Basic Education and the Union of United Councils and Cities of Cameroon (UCCC).

Albeit the achievements there were still some challenges that hindered the success of the campaign.

Due to the late availability of funds the campaign was launched in May rather than in the January-February as previously envisioned and this caused disruptions as May is a period whereby schools prepare for exams.  Limited time was allocated for micro-planning at district level which accounted for the limited time used for training sessions, and supervision of activities at both regional and district levels. In addition, there were delays in obtaining reports from school  due to disruptions caused by the school holidays immediately after exams.
[spacer height=”20px”]