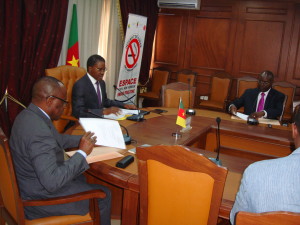 Left to Right – WHO Representative to Cameroon, Dr. Jean-Baptiste Roungou, Minister of Public Health Andre Mama Fouda, and Permanent Secretary for the National Programme for the Control of Schistosomiasis and Soil-transmitted Helminthiasis, Professor Louis-Albert Tchuem Tchuente.

On Monday, 1st February 2016, the National Programme for the Control of Schistosomiasis and Soil-transmitted Helminthiasis hosted a meeting in preparation of the 2016 National Campaign for the Deworming of school-aged children in all 10 regions of Cameroon. The meeting which took place at the Ministry of Public Health, was presided by His Excellency, the Minister of Public Health, Andre Mama Fouda. 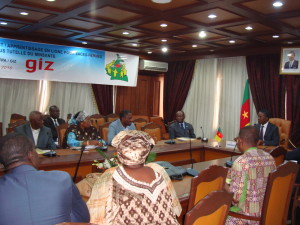 In his introductory speech, the Minister of Public Health, Andre Mama Fouda reiterated the importance of the fight against Neglected Tropical Diseases (NTDs) such as schistosomiasis and soil transmitted helminths (STHs) which continue to pose a health risk to school-aged children (5-14 years) in all regions of Cameroon. The Minister expressed his gratitude to all stakeholders for their unremitting endeavours, as the effective control of these NTDs can only be attained through the continuous collaboration and efforts from all partners.

The Permanent Secretary (PS) for the National Programme for the Control of Schistosomiasis and STH, Professor Tchuem Tchuente stated that there is a large distribution of schistosiomiasis and STH around the country, with most parts being affected by STH. No region of the country is spared and it is for this reason that every year, a campaign is launched which is aimed at deworming for free, all school-aged children around the country. The main strategy for the control of these NTDs is by deworming children in schools for they are the most vulnerable group. The permanent secretary affirmed that the National Program for the Control of Schistosomiasis and Intestinal Helminthiasis can only effectively carryout this strategy by collaborating with the Ministry of Basic Education and Ministry of Secondary Education. 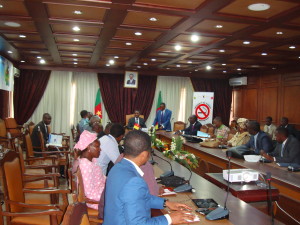 The 2016 Campaign which is due to be launched in March 2016, is set to deworm 8-10million children in all 10 regions of Cameroon. 5million of these children will consist of school-aged children including those in school and those out of school, while the remaining 3million will entail pre- school aged children in the 1-5 years age group.

The drugs needed for the preventive chemotherapy strategy during the course of the campaign are donated by pharmaceutical companies. Praziquantel is donated by Merck while mebendazole is donated by Johnson & Johnson.

The Cameroon government is pleased with the progress that has been made over the 10 years, since the campaign has been running.